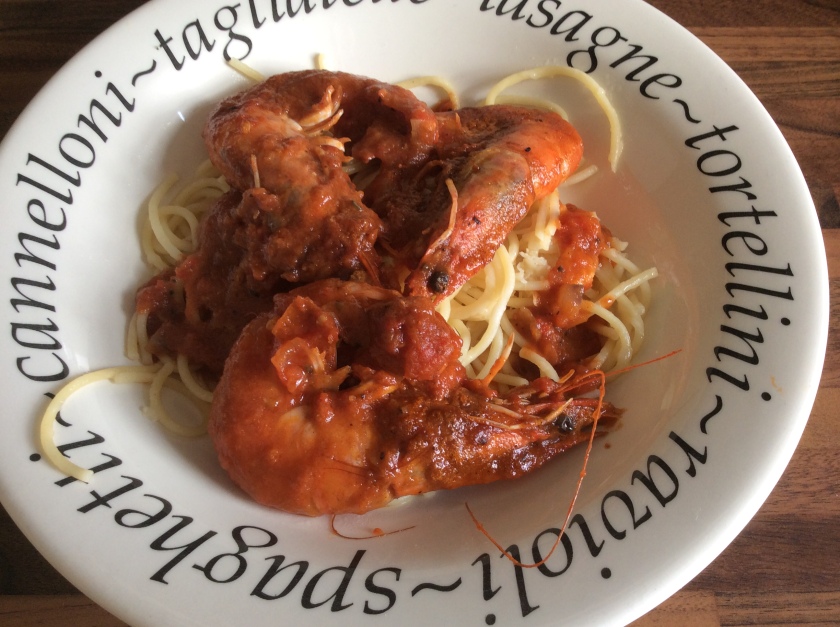 Let me start by saying that the picture doesn’t do the recipe justice. At all, like…

Hubby started making this recipe last summer in Thessaloniki. With fresh from the open market, to-die-for prawns. He would have made it at the weekend, when he had the time. Cause, you see, he is Greek and Greeks don’t mess up with food! Food is as important as family to them and it gets as much attention in detail and preparation!

It takes him hours to make it because the sauce involves a lot of simmering and adding of delicious ingredients.

I finally coaxed it out of him this morning, so here goes:

– A knob of butter then your tomatoes. Half fresh, about 3-4, half canned, a can. Add them to the onion.

– Simmer the sauce with bahari(a Greek spice mentioned in Politiki Kouzina), cinnamon and a drop of honey for 45 minutes. Add a drop of water every 5 minutes or so.

– “Sauce needs to taste cooked tomato, not raw when it is ready!”

Now for the prawns:

– Simmer them on low heat for about 45 minutes as well, until sauce cooked and dry.

– “Don’t throw the juice out as it tastes prawns!”

I challenge you to try it. He made it here as well, with prawns bought from the Belfast Saint George’s market but declared himself unsatisfied with the taste. Nothing taste the same as in Greece, phisika :-)!