Okay, so on Potato Week I decided to center a post around heart-warming food, since potato equals comfort eating and warmth in my mind.  It must go back to my childhood when my mum would have made baked potatoes for a light dinner,  the house would have smelt divine and the kitchen would have become the focal point of the house…So once winter kicks in I get the craving to, most of all, recreate that atmosphere and feel once again, the warmth and comfort of a good baked potato. Of course, now I live in Northern Ireland, the country of THE potato, so I would most times choose a good Maris Piper potato for its fluffiness and taste (I cheated this time, though and used a ready half-baked one!) Actually, except for the times when I make mash (which my dad is firmly convinced is better when made with “pink” potatoes, and I believe him, as his mash is always delicious!), I prefer a Maris Piper for roasties, potato wedges and even potato salad!

Today I decided to pair my cheat potatoes with a delicious Greek casserole, called Stifado. Because I am married to a Greek man, that is. And because I wanted to celebrate both the glorious Irish potato(be it frozen this time) and the rich-in-flavour Greek cuisine in one post!

I found, once again, my inspiration for it in a book I borrowed from the local library, Stewed! Nourish Your Soul  by Alan Rosenthal. 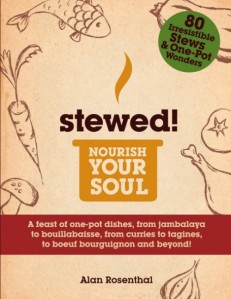 The recipe recommends marinating the beef overnight, which I did, in wine and vinegar, adding 3 cloves, one cinnamon stick, 2 garlic cloves, one teaspoon dried oregano and ground allspice.

In the morning, before I took Emma to playground, I transferred my marinated meat and its juices into the slow cooker and added (in a hurry!) one stick of celery, roughly chopped, one carrot and 16 shallots, peeled and left whole. For colour and acidity, I added half a tin of chopped tomatoes and then covered and left to simmer for a good 7 hours on slow.

Colourful dish, wish you were in my kitchen this morning to smell the spices!

Heart-warming and filling, my Irish and Greek dinner!

I hope I have inspired you with this recipe to do two things:

1. have a lovely, filling potato dish this week. It’s the season they excel in, after all!

2. try a new dish. I loved the flavours in my stifado, the cinnamon and the cloves made it taste all Christmassy and rich.

I am adding this post as an entry into the Co-operative Electrical competition. 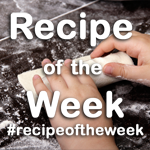